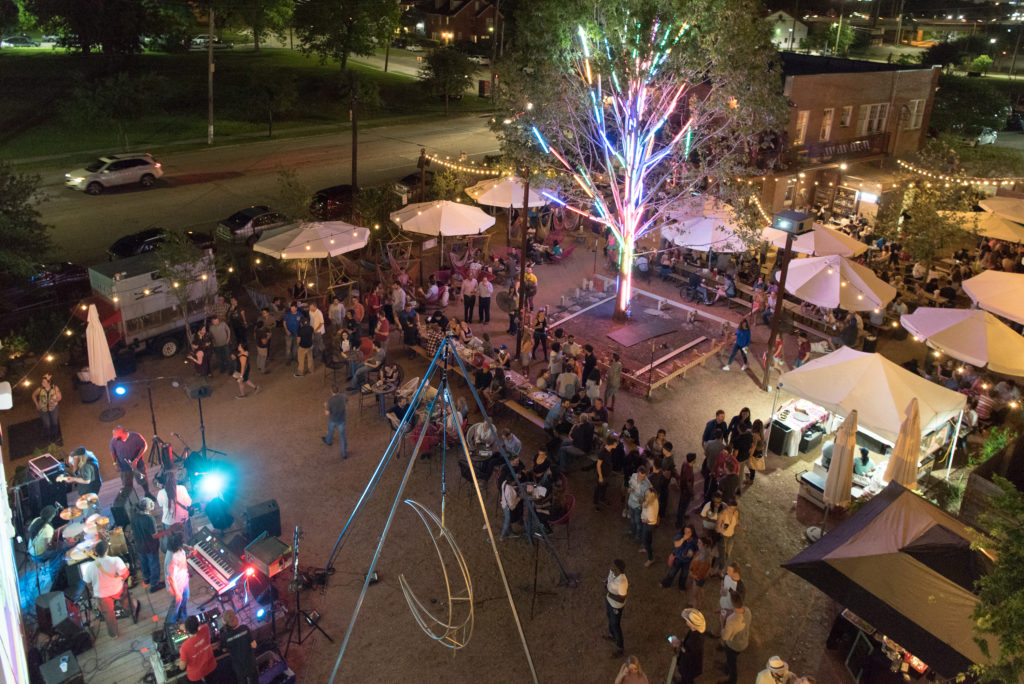 Waitresses carrying funky lighted trays of craft beers, wine and cocktails work the crowd made of young and old, and middle-aged, too.

A century ago, the red brick building was a grocery store opened by Eastern European immigrants David and Gertrude Axelrad, when Midtown was a booming residential area.

At the other end of the 1500 block of Alabama Street is Retrospect Coffee Bar, a tiny former 1920s-era Gulf Oil service station that has been painstakingly restored and repurposed as a coffee shop. The seating is all outdoors, and customers from the nearby Houston Community College walk in and young families from the nearby Museum Park neighborhood arrive with children in strollers.

In a city with a legacy of tearing down historic buildings and homes, these new neighborhood gathering places are reviving a part of Midtown by leveraging preservation as potent driver of urban renewal. The historic nature of these two businesses feeds a growing desire for authentic experiences on the part of millennials and baby boomers.

People don’t want to just sip their cappuccinos at a cookie cutter Starbucks. They want to socialize over their favorite craft beer in a place with history and a story. And preserving the past as a way to appeal to this yearning for authentic experiences isn’t just happening in Midtown.

Popular Houston bars and restaurants like 13 Celsius, Mongoose Versus Cobra, Weights & Measures in Midtown, BCN Taste & Tradition in Montrose and 8 Row Flint in the Heights all are historic preservation efforts. In downtown, the new Le Meridien boutique hotel was built as an office high rise in 1952 and even the Sam Houston Hotel is a structure saved from the wrecking ball.

Using historic preservation to fuel an area’s revival has worked elsewhere. New York’s famous High Line Park was created from an abandoned spur of the New York Central Railroad. Portland’s River District – including its Pearl District, Old Town and Chinatown – is a mix of old and new, and San Antonio’s revitalization plan under way now includes dedicating $450 million to restore the Alamo and reimagine its surrounding area.

Architects and designers for years have tried to create period structures outfitted retro style, but no one can match the feeling of the real thing.

The National Trust for Historic Preservation in 2017 studied millennials’ connection to older structures, and found that an astonishing 97 percent of them feel it’s important to preserve buildings, architecture and neighborhoods.

Not only do they prefer to shop and dine in unique and historic settings, but they even want their homes – historic or not – to be in neighborhoods with history.

“What interests people most about a building is its story – that something happened here before that meant something,” said Olivia Tarricone, a preservation architect who works from the National Trust’s Houston field office. “It’s being next to history, not just reading about it in a book, but being in the presence of history.”

“And millennials are a given with historic buildings, but it’s amazing to see that baby boomers and college students are drawn to historical buildings, too. There’s a universal appeal.”

Elizabeth Rives, who relaxed with a group of friends at Axelrad on a busy Thursay night, agreed. “I was just in Charleston, and I like that old houses there are used for different things and not torn down,” she said. “That this is an old building adds to the character of it. We’re all from Houston, and we want it to feel like Houston, not Dallas or San Antonio or Austin.”

The Retrospect and Axelrad developers all believe strongly in historic preservation, and wanted to save the buildings long before they even knew what they’d do with them.

“I think millennials and we – even though we’re not categorically millenials – share sensibilities,” said 40-year-old Monte Large, one of the Axelrad developers. “If you filled out a form of things we care about, walkability, bike-ability, authentic, experiential, things that are cool and relevant, visually and culturally, and Instagram-able – all those things tied into the millennial experience – we have the same sensibilities.”

Historic preservation has come a long way in Houston, noted Deborah Keyser, president of Preservation Houston’s board of directors.

The group started giving its Good Brick Awards in 1979, and for more than a decade could only give out a few a year. This year, 15 were handed out, including two to the owners of Retrospect and Axelrad.

At the group’s recent Cornerstone Dinner, Keyser joked that there were years they worried they wouldn’t have any entries. In fact, in 1995 and 2002, none were given.

“We’re getting the movement back with urban neighborhoods,” said David Bush, Preservation Houston’s executive director. “People want to move back downtown, and there’s a demand for these kinds of places. People like Starbucks, but they also like things that are unique.”

Through the years, they’ve honored numerous homeowners for restoration efforts when a demolition would have been easier. But they’ve also honored developers who saw new uses for old buildings.

Adam Brackman opened Axelrad at the corner of Alabama and Almeda in December 2015 with Large and Jeff Kaplan. Brackman, whose family purchased much of the block that the two Midtown businesses are on, said he and his partners always envisioned something special.

“We didn’t want to put another Starbucks in, we wanted a unique local coffee shop. Places like that are what makes a neighborhood … they’re called a ‘third place’,” Brackman said. “Your first place is your home, your second place is your office and your third place is where you go to meet with your friends, to have political conversations, to go on a first date.”

The carved limestone “Axelrad” name is still on the front of the building, and the original concrete floors and shiplap walls can’t be mistaken for modern reproductions.

The development of Axelrad and Retrospect, at Alabama and La Branch, has been another notch in Midtown’s rebirth. The Metro rail made it easy to get to, and, slowly, bars and restaurants brought in visitors. Rows of fenced-in townhomes and apartment buildings such as Camden, Mid Main Lofts and the Calais at Courtlandt Square created places to live and the new Midtown Park added greenspace as a place to play.

To demonstrate the organic nature of their clientele, the Axelrad developers point out that while they expected most of their customers to enter the bar and outdoor beer garden from the back – where their parking lot is – the reality is that they come in from the street side, where walkers, bicyclists and Uber users enter on foot.

At Retrospect, owners Chas and Sharon Haynes – who own the Tacos A Go Go and Fajitas A Go Go restaurants elsewhere in the city – said that for years they drove by the funky abandoned service station, marveling at the occasional displays of public art that went up, hoping that someone, someday would do something with it.

Developer Bill Franks lauded both projects as small steps in the ongoing revitalization of Midtown.

Midtown began as a residential area, but in the 1970s it filled with businesses of Vietnamese immigrants. When rents increased, they headed to Chinatown on far west Bellaire Boulevard, leaving many Midtown storefronts empty. Little by little, though, transportation, buildings and greenspace there have grown.

“I saw it in downtown, too – a building here, a building there. They’re small businesses but they start to transform an area,” said Franks, a former chair of the Midtown Management District. “People go there and then they say ‘This is an interesting part of town I didn’t know about.’ Then they begin to live there, and it becomes a neighborhood, and it’s transformed.”

Franks develops new buildings, but he’s involved in historic preservation, too, earning Good Brick Awards for restoration of the Sam Houston Hotel, Spire Historic Buildings and the Jesse Jones building more than a decade ago.

“The Retrospect building was vacant for 30 years or more and now it’s vibrant. I know that with Axelrad, there were plans to tear it down,” Franks said. “Adam and Monte and Jeff really had a great vision for it. It’s not just a bar, it’s a cornerstone of the neighborhood now.”

The spokes of success from Axelrad and Retrospect don’t end there.

Luigi’s Pizzeria sits behind Axelrad and shares a parking lot. Customers can flow from one to the other, drinking adult beverages from Axelrad while eating food from Luigi’s. Since Axelrad opened, Luigi’s business has doubled.

Instead of roasting their own coffee, the Haynes’ use coffee beans from local roasters at Retrospect. While they bake their own muffins daily, they buy other pastries from Cake and Bacon, a small wholesale bakeshop and butchery.

Brackman, Large and Kaplan knew their customers would want food options, so they set up a rotation of food pop-ups and trucks.

“Axelrad and Adam were the first to give me a shot. They believed in me as an entrepreneur starting my own business,” said Garcia, who serves her Southeast Asian fusion food there on Thursdays.

“Adam was instrumental in getting started,” Adams said. “I expected to be asked for a tasting or credentials; he didn’t ask for any of that. Instead he asked ‘When can you start?’ They gave me a foundation, a place from which I could grow. That place is always going to be home to me.”

The Axelrad partners hired Mario and Elizabeth Rodriguez of Wonky Powers Records – who were getting their own music business off the ground around the same time Axelrad opened – to handle music programming.

Ruffins, the musician – also an investor – had a weekly residency there for a year and still performs occasionally on Wednesdays, jazz night.

At Retrospect and Axelrad the goal was always to help their community grow.

“We would drive by it, and we would see these different art installations, and we thought ‘gosh I hope somebody does something with that building,” Chas Haynes said of what is now his coffee shop. “So it seemed like kismet when Sharon came home one day and said ‘You remember Adam? He owns that gas station on the corner of LaBranch. We have to do this.'”

“It certainly was a lot harder than we anticipated, but we’re thrilled, and we hope Houston is thrilled,” he added. “Houston has so much wonderful architecture, but it’s mostly new. To be able to preserve something like this is great.”